EverQuest's Broken Mirror and my 7 years of bad luck

It's been 7 years since I had a character at level cap in EQ, which was during the Secrets of Faydwer addon, on the Test server. Not exactly bad luck, but with the addon being named 'The Broken Mirror' it wouldn't do to resist that sort of post title. I'm hoping to 'catch up' this time around, although I've been ineffectually pursuing that goal for the past couple years.

EverQuest's 'The Broken Mirror' just came out, an addon which back-ports a deity written for EQ2 into EQ's lore. The level cap stays at 105, and it seems to me like it has about the same spread as previous addons of raid:group content. Solo is probably the usual setting of weird areas that you can sometimes scrape by, or tasks that you can do sometimes, or with a second account and mercenaries, or with a certain class.

As a solo player, I never really hope to see the current content, but I do know that once you get 20 or so levels on content it becomes very easy to do by yourself. If I can hustle myself up to 105, that should give me enough leeway to roll through the stuff that I want to up to the Seeds of Destruction progression, which is about as far as I'm interested in anyway.

After a quick jaunt through the safe 'town' zone of the new addon and realizing that even though you only needed to be Level 70 to port there I definitely couldn't do anything, I headed back to PoK to buff up and go to an XP area. Strangely enough, on this 'new addon just released' landscape I found myself participating in an unrelated Guide event.

Our goal was to gather a list of 30 plants(or as many as we could) in under an hour. Around 6 or 7 were vendor buyable, and the rest were forages or monster drops. I ended up in second place with 14, but it was refreshing to lose since I assumed I had an unfair advantage as a druid(max forage+forage AAs, plus the ability to teleport all over.) A Ranger had 15, I'm assuming he raided his bank for stuff he had foraged in the past.. I keep all that on another character and didn't want to relog during the event(although some 'new addon day' client instability had me involuntarily restart when zoning into Wall of Slaughter regardless.)

The 'rewards ceremony' phase of things felt really awkward to me, and I ended up running off rather than watching the not-really-bad-but-not-really-great-either Guide text. Something about those events makes me feel uncomfortable if it's clearly just a person typing in realtime and not some prepared text. It doesn't feel like you unlocked something; it feels like you're talking to Joe.

In the end it was a pretty good evening. I got the little bit of XP I needed to hit 88 and scribed my spells, and got a shield ornament and a 14 slot bag from the event(too small to bother using nowadays, but it'll go in my bank.)

In retrospect, I've tried to be picture heavy in my posts, but I didn't even think to take any screenshots during the guide event or exploring the new addon areas. Since nobody really reads this I suppose I'm just writing to feel like I wrote something so it doesn't matter too much anyway.

I wonder if my luck will change if I get to the cap and finish all the things I want to in EQ?

P.S. Was feeling sad about lack of pictures, so here's an unrelated shot of Innoruuk's corpse. 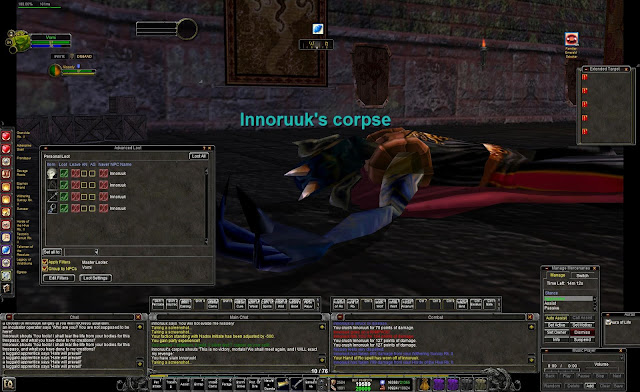 Email ThisBlogThis!Share to TwitterShare to FacebookShare to Pinterest
Labels: Everquest